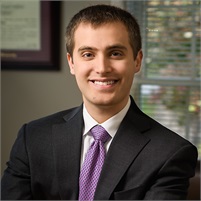 Following graduation, Paul accepted a position in Philadelphia where he lived and worked for a year before returning home to join the family practice as a Registered Representative.

Paul is both Series 7 and Series 66 registered.

In his spare time, Paul enjoys spending time with his wife Emily, his family, friends, and the two family dogs.

We’ve built a handy mobile app that allows you to ask us questions on-the-go and to receive helpful notifications.

Get Financial News & Updates Delivered to Your Inbox